This leaflet includes advice from consensus panels, the British Association of Urological Surgeons, the Department of Health and evidence based sources; it is, therefore, a reflection of best practice in the UK. It is intended to supplement any advice you may already have been given by your urologist or nurse specialist as well as the surgical team at Addenbrooke’s. Alternative treatments are outlined below and can be discussed in more detail with your urologist or specialist nurse.

Removal of the lymph nodes from your retroperitoneum (the back of your abdominal cavity behind the intestines) where the main blood vessels (aorta and inferior vena cava) run. Lymph nodes are small glands, close to the blood vessels, that trap cancer cells and may become enlarged as a result.

We do this procedure for some testicular cancer patients who have completed and recovered from chemotherapy. If lymph nodes do not shrink to a normal size (less than 1cm diameter) after chemotherapy, there may be cells within them that could become cancerous in the future.

Observation – this is the only alternative to surgery, and is not recommended because it may leave potential cancerous cells to grow again at a later date.

Although you will have discussed issues of sterility with your urologist or oncologist, it is important to be aware that the nerves which control ejaculation run through the middle of the surgical area. We try to preserve these nerves but there is always a risk of damage because there may be a lot of scar tissue around the nerves after the chemotherapy treatment. This can result in weak or absent ejaculation after the operation and the semen may even be directed back into your bladder instead of coming out through your penis (a 'dry' orgasm).

This is not, of course, harmful; the semen is flushed away with your urine but, if this does occur, it is very likely that you will be sterile. This does not, however, always happen and your urologist may be able to tell you if it is likely in your case.

If you have not already done so, it may be possible for you to store semen as a precaution and you should discuss this with your urologist before the procedure.

You will see the urology team in the Uro-Oncology clinic to discuss the operation in detail and you will usually be admitted on the day before your surgery.

You will normally undergo pre-assessment on the day of your clinic or an appointment for pre-assessment will be made from clinic, to assess your general fitness, to screen for the carriage of MRSA and to perform some baseline investigations.

After admission, you will be seen by members of the medical team which may include the consultant, junior urology doctors and your named nurse.

On the day before your operation, you will only be allowed to drink clear fluids such as water, squash, black tea or coffee. You may also be given a laxative to clear your bowel. Immediately before the operation, you may be given a pre-medication by the anaesthetist which will make you dry-mouthed and pleasantly sleepy.

You will need to wear anti-thrombosis stockings during your hospital stay; these help prevent blood clots forming in the veins of your legs during and after surgery.

Please be sure to inform your urologist in advance of your surgery if you have any of the following: 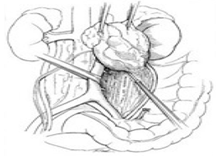 You will have a drip to keep you hydrated, through which you can also be given medication. You will be given separate information about patient controlled analgesia (PCA) or an epidural anaesthetic which are designed to minimise postoperative pain. You will be given oxygen via a mask or nasal cannula. 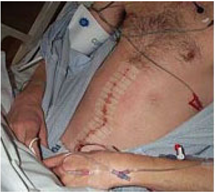 You will receive physiotherapy, starting on the day after the operation, to encourage mobility, deep breathing and leg movements. You can usually start drinking water two to three days after the procedure and, once bowel activity has returned, you will be able to drink and eat freely.

☐ Temporary insertion of a bladder catheter and wound drain

☐ Problems with ejaculation failure after the surgery

☐ Accumulation of lymph fluid after the operation, requiring drainage

☐ Need for further treatment of the cancer

☐ A further operation for bowel obstruction caused by adhesions

(These rates may be greater in high-risk patients, for example those with long term drainage tubes, after removal of the bladder for cancer, after previous infections, after prolonged hospitalisation or after multiple admissions.)

When you leave hospital, you will be given a discharge summary of your admission. This holds important information about your inpatient stay and your operation. If, in the first few weeks after your discharge, you need to call your GP for any reason or to attend another hospital, please take this summary with you to allow the doctors to see details of your treatment. This is particularly important if you need to consult another doctor within a few days of your discharge.

You will get home about a week after surgery and will require a minimum six week period of convalescence. After this you should be able to resume exercise gradually. The return to work will depend on the type of work you do. Very heavy manual labour might require up to three months’ further time off work. Light work would be possible normally after two months or so.

You should watch out for signs of inflammation of the wound or swelling of the abdomen which might indicate fluid collection.

If you develop a temperature, increased redness, throbbing or drainage at the site of the operation, increasing abdominal pain or dizziness, please contact your GP or the Urology ward (Ward M5, 01223 254850). Any other post-operative problems should also be reported to your GP, especially if they involve chest symptoms.

You will have had a large operation and will feel tired when you get home. It is important to rest and, at first, you may feel like having a sleep during the day.

It is also important to take exercise regularly; this should be very gentle at first but can be gradually built up as you start to have more energy. You may not feel fully recovered for six to 12 weeks.

The area around your incision will heal quickly but you may wish to cover it with a dressing to keep it clean and dry. You should keep physical activity to a minimum for the first 10 days after returning home. If you require a sick certificate, you can obtain this from the ward to cover the time you spent in hospital; thereafter, you will need to obtain a further certificate from your GP.

It will be at least 14 to 21 days before the pathology results on the tissue removed are available. It is normal practice for the results of all biopsies to be discussed in detail at a multi-disciplinary meeting before any further treatment decisions are made.

You and your GP will be informed of the results after this discussion. You will normally be reviewed in outpatients six weeks after your operation to monitor your progress. Your oncologist, however, will normally arrange to see you earlier than this (after two to three weeks) to discuss the pathology (biopsy) results.

It is your responsibility to ensure that you are fit to drive following your surgery. You do not normally need to notify the DVLA unless you have a medical condition that will last for longer than three months after your surgery and may affect your ability to drive. You should, however, check with your insurance company before returning to driving. Your doctors will be happy to provide you with advice on request.

Same sex bays and bathrooms are offered in all wards except critical care and theatre recovery areas where the use of high tech equipment and/or specialist one-to-one care is required.

Yes. As part of your operation, various specimens of tissue will be sent to the Pathology Department so that we can find out details of the disease and whether it has affected other areas. This information sheet has already described to you what tissue will be removed.

We would also like your agreement to carry out research on that tissue which will be left over when the pathologist has finished making a full diagnosis. Normally, this tissue is disposed of or simply stored. What we would like to do is to store samples of the tissue, both frozen and after it has been processed. Please note that we are not asking you to provide any tissue apart from that which would normally be removed during the operation.

We are carrying out a series of research projects which involve studying the genes and proteins produced by normal and diseased tissues. The reason for doing this is to try to discover differences between diseased and normal tissue to help develop new tests or treatments that might benefit future generations.

This research is being carried out here in Cambridge, but we sometimes work with other universities or with industry to move our research forwards more quickly than it would if we did everything here.

The consent form you will sign from the hospital allows you to indicate whether you are prepared to provide this tissue. If you would like any further information, please ask the ward to contact your consultant.

PatientLine: *801 (from patient bedside telephones only)

MINICOM System ('type' system for the hard of hearing)