This leaflet includes advice from consensus panels, the British Association of Urological Surgeons, the Department of Health and evidence based sources; it is, therefore, a reflection of best practice in the UK. It is intended to supplement any advice you may already have been given by your Urologist or Nurse Specialist, as well as the Surgical team at Addenbrooke’s. Alternative treatments are outlined below and can be discussed in more detail with your Urologist or Specialist Nurse.

This involves the administration of shockwaves through the skin to fragment urinary tract stones into small enough fragments to pass naturally. The procedure involves either x-ray or ultrasound scanning to localise the stone(s).

You will usually be admitted on the same day as your treatment. It may be useful to bring your own dressing gown to wear over your hospital gown. On arrival, an x-ray may be taken to confirm the presence of your stone(s). 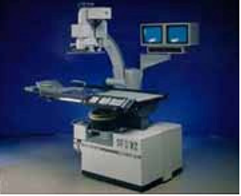 You may have a light meal on the morning of your treatment but you should drink only clear fluid in the two to four hours before the treatment. Please inform the nursing staff of the person who will be driving you home. We may give you an injection of a strong painkiller or an anti-inflammatory suppository once you arrive in the clinic.

Please be sure to inform your Urologist in advance of your surgery if you have any of the following:

Normally, no anaesthetic is necessary and you will be awake throughout the procedure, but children usually require a general anaesthetic.

The treatment will be monitored by a nurse and a lithotripsy technician. The shock waves can cause deep discomfort in the kidney and a sensation of being flicked with an elastic band on the skin of your back. If this proves excessively painful, additional painkiller and sedation can be administered during the treatment. Treatment normally lasts between 30 and 60 minutes, depending on the size of your stone(s). 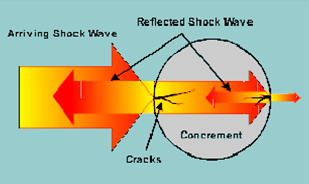 (Picture depicting what happens to the stone during treatment)

You will normally be taken back to a side room to recover. The specialist nurse will also perform routine post-operative checks.

As soon as you have recovered from the treatment, you will be able to go home.

Painkillers will be given to you before your discharge.

The average hospital stay is 2-4 hours.

☐ Bleeding on passing urine for a short period after the procedure

☐ Urinary tract infection due to bacteria released from the stone during fragmentation, requiring antibiotic treatment (10%)

☐ Recurrence of stones (less than 1%)

When you get home, you should drink twice as much fluid as you would normally to flush your system through and minimise any bleeding or infection. Painkillers should be taken as necessary.

Some blood in the urine is normal for 48 to 72 hours. If you develop bruising/blistering in your loin or on your abdomen, simple skin creams will usually ease any discomfort and the bruising normally resolves within seven days.

(Picture of fragments of stones compared to matchstick)

You will be informed before your discharge of any follow-up arrangements. This will usually involve either further lithotripsy, operative surgery or a simple follow-up outpatient appointment when a further x-ray will be taken.

If you have a stent in place, you may be given an appointment for removal of the stent in the Day Surgery Unit under local anaesthetic if this is appropriate. You can prevent further stone recurrence by implementing changes to your diet and fluid intake. If you have not already received a written leaflet about this, contact your named nurse, the specialist nurse in outpatients or your consultant.

It is your responsibility to ensure that you are fit to drive following your surgery.

You do not normally need to notify the DVLA unless you have a medical condition that will last for longer than three months after your surgery and may affect your ability to drive. You should, however, check with your insurance company before returning to driving. Your doctors will be happy to provide you with advice on request.

Same sex bays and bathrooms are offered in all wards except critical care and theatre recovery areas where the use of high tech equipment and/or specialist one to one care is required.

There is no specific research in this area at the moment but all operative procedures performed in the department are subject to rigorous audit at a monthly audit and clinical governance meeting.