This information leaflet has been written to provide information for parents and carers of boys diagnosed with Balanitis Xerotica Obliterans (BXO). This leaflet discusses what BXO is, symptoms, how BXO is diagnosed, its treatment and management.

BXO is a penile skin condition which affects the foreskin, may also affect the rounded head of the penis (called the glans penis) and, less commonly, the urethra (the tube which carries the urine from the bladder out of the body).

In BXO there is long term (chronic) inflammation of the glans penis; referred to as balanitis. Patches (called lesions) appear on the affected skin causing an abnormally dry appearance (referred to as xerotica) with white, thickened plaques. Lesions start in the foreskin but can extend to the surface of the skin on the glans penis and cause the involved areas of skin to fuse together. As a result, the foreskin can become firmly adhered to the glans so retracting the foreskin (pulling it back) becomes painful, difficult or impossible.

The cause of BXO in boys is, as yet, unknown. BXO can be more common in adult men with auto-immune diseases (in which the body’s immune system attacks healthy cells by mistake); such links have not been identified in boys. There are also some reports of BXO running in families.

How common is BXO in boys?

The incidence of BXO is believed to affect 0.5% of boys by their 15th birthday.

What symptoms do boys with BXO have?

Whilst boys with BXO will find it difficult or impossible to retract (pull back) their foreskins, many boys without BXO will also have a non-retractile foreskin.

Before birth the foreskin of a baby boy is fused to the glans so, at birth the majority of foreskins are non-retractile. The foreskin gradually detaches from the glans over time. Separation occurs at a variable rate and for some boys may take until their teenage years.

As it is part of normal development and it is not uncommon for young boys to have nonretractile foreskins, it is essential that this normal situation is clearly distinguished from the non-retractile foreskin that is due to BXO.

Issues or concerns about passing urine are the commonest reason a boy with BXO is taken to see a doctor.

How is BXO diagnosed?

During your son’s appointment his penis will need to be examined to identify if:

Uroflowmetry (also called a flow rate test) involves passing urine into a machine which has the appearance of a portable toilet. The machine has a computer attached which measures how much urine your child passes and how quickly.

Following its removal during circumcision (see below), the foreskin is sent to the laboratory where it is examined. Results are usually available by the time of your son’s first review appointment following circumcision and will be discussed with you. 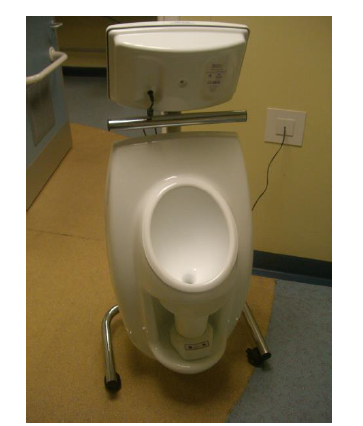 What are the complications of BXO in boys?

Increased risk of bleeding during circumcision

The urethra is the name given to the tube which takes urine from the bladder out of the body. BXO can cause scarring in the urethra which causes a narrowing and slows the flow of urine; this is referred to as a urethral stricture. Some boys experience pain due to the stricture and can have the same symptoms related to passing urine as seen with meatal stenosis. Further surgery is likely to be indicated to treat a urethral stricture.

In adult men links with BXO and penile carcinoma have been suggested but such links have not been seen in boys.

How are such complications prevented?

Complications from BXO can be prevented by early diagnosis, prompt treatment and close monitoring during follow up.

What is the treatment for BXO?

Circumcision is required to treat BXO. Circumcision is the surgical removal of the foreskin. We have a parent/carer information leaflet which specifically focuses on circumcision in boys and contains full information on what this operation involves and its complications. Please ask your doctor or nurse if you would like a copy.

Many boys will also require a course of steroid treatment applied to the affected skin. The frequency which the steroid cream needs to be applied and the duration of treatment will depend on severity of BXO, each boy’s response to treatment and their compliance with applying the cream.

What monitoring will be needed?

Boys will be seen in the follow up clinic two to three weeks after their circumcision. Histology results are usually available by the time of this appointment and will be discussed with you.

It is important that boys attend their follow up appointment with a full bladder for an uroflowmetry urine test. At the follow up appointment the penis will be examined to assess healing and presence of any BXO on the glans penis. Ongoing treatment and monitoring will be planned and, for those boys requiring it, a prescription will be provided for topical steroid treatment.

Boys requiring topical steroid treatment will need regular monitoring to assess their progress. Questions will be asked about your son’s voiding, your son will be examined and have an uroflowmetry test. The time between appointments will gradually decrease as the BXO improves and uroflowmetry results are observed to be stable.

Once treatment is completed boys will continue to be monitored (including examination and uroflowmetry test) for some months to assess for any signs of recurrence or associated complications before being discharged.

Can BXO recur after completion of treatment?

Currently there are few long term research studies about boys with BXO but, in our experience of caring for many boys, recurrence in those who have completed their course of treatment appropriately appears to be minimal. Before your son is discharged you will be given advice regarding what to look out for in the long term (recurrence of white patches on the glans, problems with voiding such as spraying, taking a long time to void or having pain on voiding) and the importance of seeing your GP for re-referral should such signs occur.

During your child’s hospital visits he will need to be examined to help diagnose and to plan care. Examination, which may take place before, during and after treatment, is performed by trained members of staff and will always be explained to you beforehand. A chaperone is a separate member of staff who is present during the examination. The role of the chaperone is to provide practical assistance with the examination and to provide support to the child, family member/carer and to the person examining.

For information or questions before or after admission please call: