Two sisters in their early twenties made headlines recently when they had their stomachs removed at Addenbrooke’s in a bid to spare them from an inherited disease.

Lisa and Ruth Bendle are believed to be the first sisters in Britain to have their stomachs removed on the same day. They took the decision because they were found to have early signs of stomach cancer. Sadly, the disease had already killed their father, aunt, cousin and grandmother. 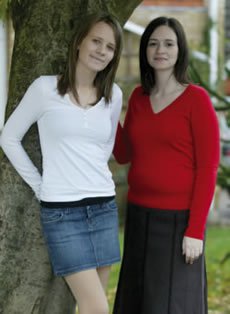 Their care was a huge team effort, with contributions from many staff in diverse roles. To find out more, we met up with some of those who helped 23-year-old science teacher Lisa, and Ruth, a 20-year-old Surrey University student, along their journey.

Because the sisters thought they might be at risk from an inherited form of stomach cancer, they discussed their concerns with Dr Huw Dorkins, a clinical geneticist, at their local hospital in Hemel Hempstead. He put them in touch with the Family Gastric Cancer Registry – a research project that looks at inherited forms of cancer, and Dr Rebecca Fitzgerald, MRC Group Leader and Honorary Consultant Gastroenterologist at Addenbrooke’s, who suggested that the sisters had an annual check-up. Lisa and Ruth then began to have regular endoscopies at University College Hospital in London to check whether the disease had developed in them.

In July 2007, after only their second endoscopy, early signs of cancer were detected. This led the sisters to meet Mr Richard Hardwick, a specialist upper gastro-intestinal (GI) tract surgeon at Addenbrooke’s, and to decide to have surgery to remove their stomachs. “This was a difficult situation for them having lost their father to stomach cancer but they were both very brave about having the surgery,” says Richard.

Richard was aided by his personal assistant Patz Harradine, who organised appointments and provided moral support.

After the discovery of cancer in the sisters’ stomachs, tests then confirmed that they carried a newly-discovered gene that causes stomach cancer.

Dr Rebecca Fitzgerald explains: “It’s a big decision for families to take genetic testing for the faulty gene. They have to be able to face the consequences of a positive test. The options for people who have a mutation are either endoscopy screening to try to detect signs of cancer or preventative surgery. We are trying to find out more about why alterations in this gene cause cancer so that we can offer alternative treatment to these people and understand more about the causes of the more common types of non-hereditary stomach cancer.” 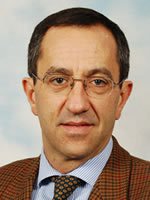 Carlos Caldas, Professor of Cancer Medicine, heads up the Family Gastric Cancer Registry. All the research for the project is done in his lab in collaboration with Cancer Research UK on the Addenbrooke’s campus, and with Dr Fitzgerald. Professor Caldas’ team also keeps track of all people in the UK who have had gastrectomy's (surgery to remove the stomach) to avoid developing disease. “We look at all the removed stomachs to learn more about the disease and send patients a quality of life questionnaire every year to see how they are coping,” he says.

It was the job of Nicola Grehan, Research Nurse, to sign Lisa and Ruth up to the research project. “I had phone contact with them to start off with, and sent them the information which told them what the study was about. What we’re looking at is the impact of genetic testing and the operation, as well as the psychological and physical recovery of the girls.”

The sisters were supported along their journey to surgery by specialist nurses Ben Smith, Mhairri Duxbury and Linda Bycroft. Ben says: “As a team we help co-ordinate patients’ journey through hospital and follow them while they are in. We were there for Lisa and Ruth and their mother.” Mhairri says: “I was involved from early on from the first clinic appointment just as a face for them to have a chat with if they felt it was necessary.” She saw the sisters on a regular basis while they were in hospital and has kept in touch by telephone and email to make sure they are OK.

Before Ruth and Lisa could have their operations, they both had a CT scan to find out more about their condition. Heather Jones and Mary-Anne Coleman were the radiographers who performed the scans. Mary-Anne says: “The scan gave a lot of information about their anatomy and condition.”

It was both unique and very challenging.

Dr Kevin Gunning was the consultant anaesthetist for the sisters’ surgery on 12 September this year. “I saw them the night before to discuss what we were going to do and pain relief after anaesthesia. Obviously they were quite anxious and because this was an unusual operation at that age, they had a lot of questions. On the day of the operation we anaesthetised and operated on them one after the other. I made sure it went smoothly and they woke up comfortably after the operation. It was a challenge doing such major surgery on two people who were fit and healthy, and it was the first time for me to anaesthetise two sisters one after the other, so it was both unique and challenging.”

Edna Kouzel, the team leader in theatres five and six, and her team were on hand in the operating theatre to ensure all went well. “As Lisa and Ruth’s circumstances were a little unique, the care and attention they both received whilst in our care could not have been possible without the incredible hard work displayed by all of my team members,” she said.

Richard Hardwick and his team performed the gastrectomy operations, which each took three hours. The surgery passed without complications.

After being cared for immediately after the surgery in the recovery area, Lisa and Ruth were taken to the Intermediate Dependency Area, where staff look after patients who come from theatres or intensive care and still need a high level of support. Moira Howley, Junior Sister, explains: “The girls came together from theatre in beds next to each other. I gave them basic post-op care and pain relief. I also gave them emotional support as it was a big operation. They did remarkably well and were only with us for a couple of days.”

Later the sisters were transferred to Ward C7.

Guided by the surgeons and anaesthetists, Andy Bell, charge nurse for the Acute Pain Service, and his team kept a check on Lisa and Ruth in the days following surgery to make sure their pain was controlled and they were comfortable.

While Lisa and Ruth were recovering, Dr Vicki Save, Consultant Histopathologist and Lead GI Pathologist, was examining the removed stomachs to confirm the diagnosis of cancer and to see how far and how deeply it had spread. “I took multiple samples from the stomachs and looked at them under the microscope to establish this.” Because the sisters were also involved in research, the remainder of the stomachs was also sampled and is being analysed to help to map out where the disease tends to spread and help other families in the future.

Research is now being done by Dr Fitzgerald’s team on the stomachs to understand more about the molecular changes that caused disease in the sisters.

Lisa and Ruth are now adjusting to life without their stomachs. They eat six small, high-calorie meals a day, and their food now passes straight to the small intestine, which will in time stretch to form a small pocket that acts as a stomach. To prepare them for the change, Sam Grimes, Chief Oncology Dietitian, saw Lisa and Ruth before their surgery to discuss their diet and how to maintain their weight after the operation. “I supported them in hospital after surgery to monitor their food intake and to check that they were consuming enough energy, protein and micronutrients to meet their requirements within the small capacity they have for meals and snacks.” Sam continues to advise them either in clinic appointments or on the telephone.

We owe our lives to this new technology. It’s a new start for us, a new life.

Speaking about the genetic testing and subsequent care, Ruth says: “We owe our lives to this new technology. It’s unbelievable really - and astonishing to think that you don’t actually need a stomach to live.”