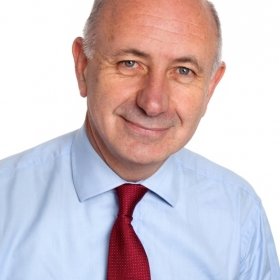 Mike became Chair of CUH on 11 April 2017. In December 2019 Mike was re-appointed for a further term of three years starting in April 2020. In 2018, he assumed the interim chair role for the Cambridgeshire and Peterborough Sustainability and Transformation Partnership, which serves a population of 1 million people with a health and social care spend of £1.5 billion. He was confirmed to continue in this role in September 2020 until March 2022 to guide the partnership to Integrated Care System (ICS) status. The ICS and the hospital trust are heavily focused on innovation, improvement, tackling health inequalities and promoting population health in the county.

He joined the CUH board of directors in September 2013 bringing extensive experience from health, police, transport as well as local government. He was chief executive for Westminster City Council until the end of 2013. Mike began his career at the National Audit Office in 1981.

Mike’s non-executive roles have included non-executive director on the Joint Venture Board for the University Campus Suffolk, plus positions as chair for the Prince’s Trust for Suffolk and the East of England Regional Chief Executives’ Group. He was also chair of the Central London Resilience Panel which includes all agencies including health and managed emergency planning.

Mike also held a representative role on the Olympic Games Transport Board, overseeing the overall transport consequences of hosting the Games in London. He is a Group Board member of L&Q Housing Association, one of the larger Housing Associations in the country.

Mike holds a PhD from the University of Hull.