I am a medical consultant in the nuclear medicine service where radioactive substances are used for diagnosis and therapy. 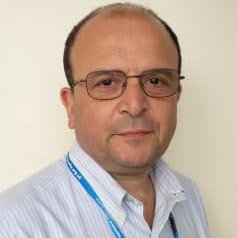 If it ain't broke, don't fix it

I am the clinical lead of the nuclear medicine service in the department of radiology at Addenbrooke's Hospital.

Our service provides clinical tests for a variety of diseases and clinical conditions using radioactive drugs with imaging and non-imaging based methods.

We are also involved in delivering radionuclide based therapies in a small number of specific clinical conditions.

I completed my medical training in Italy in 1990, followed by specialty training in nuclear medicine in 1994.

I worked in the United States from 1994 to 1998 as a clinical research fellow and associate at the National Institutes of Health, Bethesda, Maryland.

I worked in nuclear medicine for the National Research Council in Napoli, Italy from 1998 to 2003 with an honorary consultant role in the University Hospital.

From 2003 to 2016, I worked as a nuclear medicine and radionuclide therapy consultant in the National Cancer Institute in Napoli, Italy.

Since 2016 I have been a consultant at Addenbrooke's Hospital.

I am member of the:

My interests include my family, outdoor activities cycling, gardening and walking.