What is the prostate gland?

The prostate is a small gland found only in men. It is the size of a walnut and lies below the bladder and in front of the rectum. The posterior surface can be felt during a rectal examination.

It surrounds the first part of the tube (urethra) which carries urine from the bladder to the penis. The function of the prostate is to secrete a fluid, rich in nutrients and enzymes for sperm, that makes up part of the semen. One of the enzymes is called PSA (Prostate specific antigen) which can be raised in patients who have an enlarged prostate gland (BPH), prostate cancer, urinary tract infection, or following recent surgery or instrumentation (eg: putting in a catheter) to the lower urinary tract.

During a man’s lifetime the prostate can be subject to a number of diseases but the two commonest are:

In this condition the epithelium and the fibrous tissue of the prostate undergo proliferative growth, causing enlargement of the prostate gland. It is extremely common, being found to some degree in most men beyond middle age.

BPH can cause various urinary symptoms, known collectively as lower urinary tract symptoms (LUTS) but obstruction to the neck of the bladder usually results in:

These symptoms are non-specific and can also be caused by locally-advanced prostate cancer. The symptoms of BPH do not always require treatment but they can be relieved by a number of drugs. If there is no response to drugs, symptoms can be improved by trimming away the lining of the prostate gland by laser. These treatments are available at Addenbrooke’s Hospital.

Prostate cancer is the commonest cancer in men in England. It is an extremely slow-growing cancer and there is evidence that it can be found, in its very early stages, in men as young as 20 or 30.

We do not know what causes prostate cancer but, in some men, there is a familial component. Men whose fathers, uncles and brothers have had prostate cancer at a younger age or whose mothers have a history of breast cancer may be at increased risk.

How is the extent of Prostate Cancer described?

The levels of extent (the tumour stage T) of prostate cancer is shown above. This is usually established with imaging tests (Magnetic resonance imaging – MRI and Bone scan). On those, involvement of the lymph nodes and bones and other organs are also detected (described with the letter ‘N’ for nodes and ‘M’ for metastasis).

Tumours can be divided into groups of risk using your own:

What is a Grade Group?

The Grade Group system is simpler, with just five grades, 1 through 5. 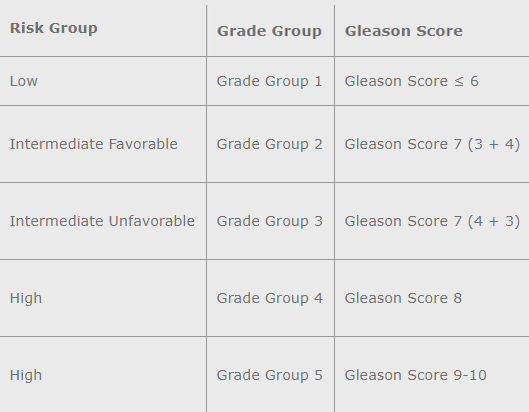 Many hospitals report both the Gleason score and the Grade Group, but there may be hospitals that still report only the old Gleason system.

Low risk cancers are those with a PSA less than 10, a Gleason grade of 6 or Grade group 1 and a clinical stage of T1 or T2a. However, younger men with a family history or those with a large amount of cancer in the biopsies may be at increased risk.

Some information about cancer risk is available from nomograms; these allow us to calculate the risk of your cancer being confined to the prostate gland (organ-confined) and the likely outcomes of various treatments.