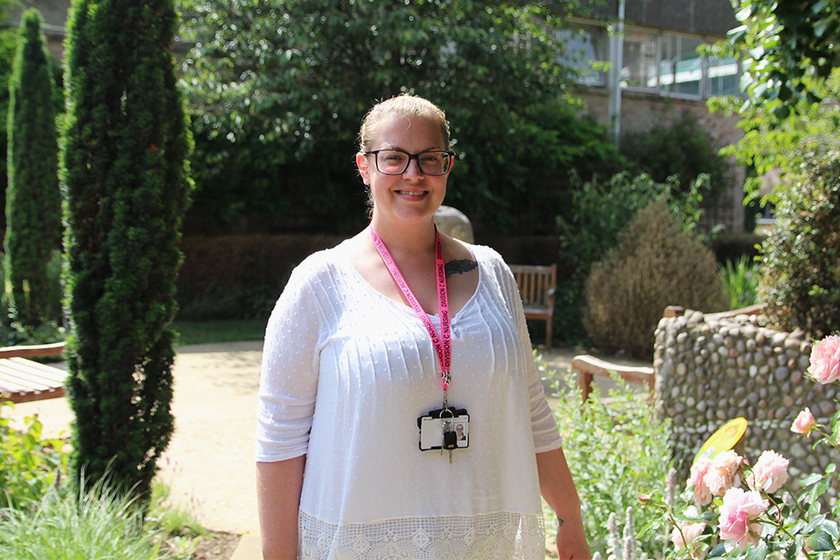 Madi, what’s your role in our hospitals?

My current role here at CUH is personal assistant (PA) to the head of nursing for division C, which covers a number of services including urgent and emergency care, medicine for the elderly and transplant.

I work for David Cleave, so my job supports him each day, along with the matrons and the deputy heads of nursing in our division. At the moment I manage eight inboxes and 17 calendars!

Tell us about your CUH journey

I’ve worked in healthcare since I was 19 - initially in care homes and then as bank staff at Royal Papworth Hospital before it moved to Cambridge - so my first port of call for a new job was CUH.

In August 2018 I interviewed for the role of medical secretary in vascular surgery and was delighted to be offered the role the same day and I stayed in that role for two years. I had been keen to move away from clinical work and enjoyed being a bit more behind the scenes.

I then spotted a vacancy for a PA in division C and I was thrilled to be offered the job. This role has a different dynamic - my previous role was very patient-led and my role now is more staff-based.

I started this role in April 2021 and David started in July 2021 - he’s been a brilliant asset to the division.

What really stands out to you?

Nursing has traditionally been heavily female-led and it’s really inspirational to have a male in such a senior role. It demonstrates that men can have top jobs in nursing and is an inspiration for all our male nurses. David has had such an impact on the quality aspect of the wards, he’s in charge of the emergency department, and along with his team he is working hard on patient flow, patient safety and quality.

There isn’t a usual day! The main focus of my day is usually dealing with hundreds of emails across multiple inboxes.

Diary management and organising meetings is important; I have to really be careful to make sure things don’t overlap or clash. My role is really organising David’s time and prioritising the things that need to be done now and what can be done later; the same with emails. It’s important for me to learn what’s important and needs an urgent response and you get to know what people need to see and what they can do at a later date.

I also carry out general admin tasks for the matrons, I attend meetings in person to take minutes which I then type up and distribute, and I help with HR elements such as sickness, absence, recruitment and job descriptions. The skills I learned being a vascular secretary all really help with the job I’m doing now.

How do you feel your role benefits our patients?

Important decisions are made at meetings I organise – things such as patient flow, quality on the wards, patient care – and this all filters down to our patients.

What would happen if the admin staff at CUH weren’t there?

Running a clinic, for example, is hugely admin based - organising, creating and setting up on Epic (our patient record system), ringing patients, confirming appointments, allocating a consultant and so on. The clinical staff do their very important role but such a great deal has gone on beforehand to get to that point.

Although I no longer have any patient contact and I don’t save lives, I like the fact that I arrange the meetings where something is decided, and which then cascades down to the wards and I had a part to play in that; albeit small.

How did your role change during Covid?

When Covid first hit I was working in vascular surgery and nearly everything had to be cancelled. The media was full of thanking the NHS and I felt like a bit of a fraud as I wasn’t on the wards, nor was I head to toe in PPE working 12 hour+ shifts dealing with patients in horrendous circumstances. So when CUH was looking for volunteers to second to other teams which needed more help, I stepped up and volunteered as part of the staff testing programme for a few months. During that time I met some fantastic people and felt I was doing something more to help the NHS and CUH.

It was the first time I’d put on scrubs, which I found quite comfy, but the PPE was really uncomfortable. However, it made me appreciate that on the hot days, staff working on a Covid red ward couldn’t just pull their masks down to wipe their mouths; they had very sick patients around them and for me it made it real. Working in an office you wear a mask and came into work every day, you don’t realise what it’s really like. Mask, visor, hairnet, gloves, aprons – until you suit up yourself (and I wasn’t even in full kit), I don’t think you can appreciate what the clinical staff were and are doing. And I was (and am still) in full admiration for them all.

What do you enjoy most about your role?

I believe jobs are what you make them and also who you work with plays a massive part in job satisfaction. When I’m in at CUH, I share an office with David, which really helps our working relationship and has made the job a lot easier.

I like that no two days are ever the same, and I enjoy the fast pace and responsibility of my position.

I also like that I can work from home two days a week and I’m trusted to do that. It does make my home life a bit easier as my partner is currently serving with the military in Ukraine at the moment and I have a nine year old daughter.

I really like the people I work with – Division C covers a lot of wards and the emergency department, so it’s a big staff group. I’ve enjoyed getting to know the ward managers, learning the wards and what each ward speciality is, as well as getting to know and understand the division and the managerial structure.

I’ve always had a relationship with Addenbrooke’s, so didn’t really think of anywhere else I’d like to work.

There are many reasons I like working at CUH:

Overall it’s a really welcoming environment to work in. The staff are friendly, flexible and accommodating.

And I really enjoy working in my division – it’s hard work and takes a lot of organising, but it’s also very rewarding when you see something come together.