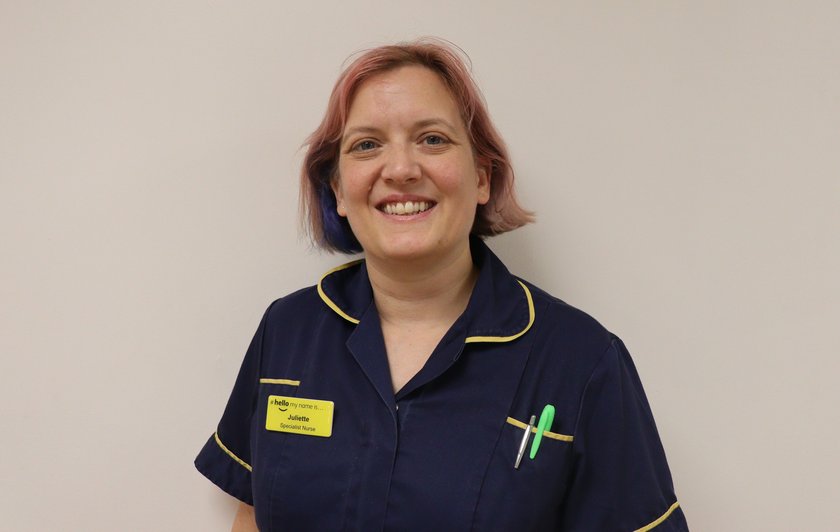 Hello, my name is Jools and I’m the lead clinical nurse specialist (CNS) for NF2 and ENT skull base here at CUH, and I’m also co-clinical lead for NF2 for the Eastern region.

Formerly known as neurofibromatosis type 2, NF2 stands for NF2-related schwannomatosis. NF2 is a rare genetic disorder caused by a misprint on one of our genes. It is present from birth, but signs of the condition do not usually appear until several years later. NF2 is characterised by benign (non-cancerous) tumours in or near the brain, the spine and on peripheral nerves in the body. NF2 can be unpredictable, but typically it affects hearing, balance, mobility and eyesight. There is no known cure and management of the condition focusses on surveillance of tumours, with interventions such as surgery, radiotherapy and drug therapy where appropriate.

NF2 is an example of one rare disease; but collectively, rare diseases are common, with around 1 in 17 people being affected by a rare disease at some point during their lifetime. So I think it is important as staff that we are aware that patients may have conditions that you haven’t come across before, but we all have a role to play in improving the patient experience, providing good communication and by helping with symptom management.

My background is a degree in management studies, but I later decided to train as a nurse. I completed my nurse training at Homerton College, School of Health Studies and undertook placements here in CUH in hepatology, gynaecology, neurosciences critical care unit (NCCU) and ear, nose and throat (ENT). After I qualified I undertook a surgical rotation and then took a permanent placement on the ENT/Plastic Surgery ward, before taking up my current role in 2010.

This role came about as the national NF2 service was commissioned by NHS England as a highly specialised service. This service looks to oversee care for all people with a diagnosis of NF2, co-ordinated from four major hubs – us in Cambridge, along with Guy’s Hospital in London, Manchester and Oxford. The service has approximately 1,000 patients across England and each centre has a clearly defined geographical area of responsibility, running satellite clinics within the area to ensure the same standard of service and care, overseeing, managing, assessing and treating people with NF2. We know that people who have specialist follow-up have better outcomes.

From our Cambridge hub we run satellite clinics at both the Queen Elizabeth and Birmingham Children’s in Birmingham, in Nottingham and in Leicester, so we cover the East of England and the Midlands, treating approximately 200 patients with confirmed NF2. We also see patients at risk of the condition, and people with other schwannomatosis disorders.

I’m very fortunate in this role that I get to work in several hospitals, including in another large skull base unit in Birmingham. I enjoy working with different teams, as we can see what works well and also what could be improved upon – it’s great for sharing best practice ideas.

The other part of my role is working for the Cambridge Skull Base Unit; seeing people with rare diseases such as benign brain tumours or peripheral nerve tumours that are next to the brain, presenting with hearing or balance problems or tinnitus, headaches or facial numbness.

The thing that I like best about CUH is the team that I work in. It’s a very strong team with a lot of people working across multiple specialities, and it’s very well organised. 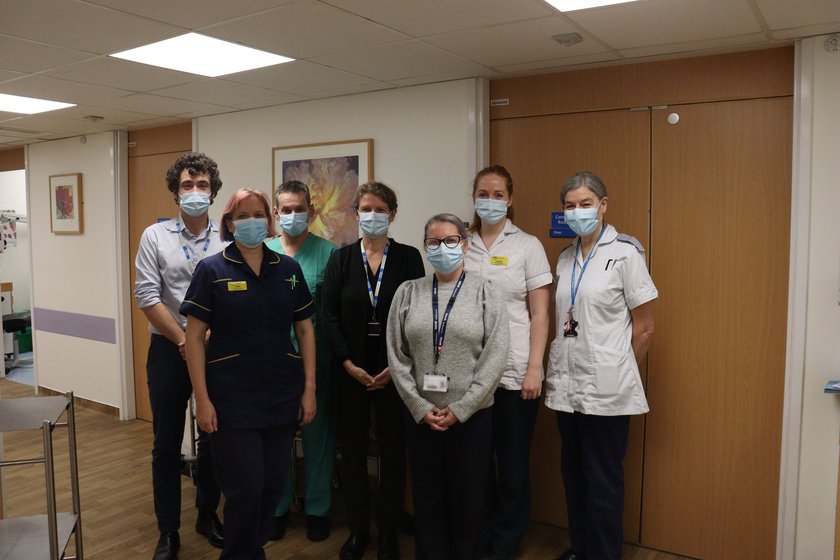 I think if you work in ENT you inherently have an interest in communication as so much of it is about hearing and speaking; we are always looking at ways of improving this for our patients.

You can remove a tumour but it doesn’t necessarily improve someone’s quality of life. For us it’s about how we help people to adapt to managing a symptom that is not life limiting, but is life changing, such as hearing loss or impaired balance function. I come to work to make a positive difference.

A lot of people that use our service have accessibility needs, in particular due to hearing loss, sight loss or sometimes dual sensory loss. We are mindful of how we set our services up so people can contact us without having to rely on someone else.

I’m passionate about helping patients to advocate for themselves; helping people find appropriate services based on their communication needs.

Communication is so important, and making adaptations for people with accessibility needs is something that we all need to do as part of the Accessible Information Standard so that patients can oversee their own health care and wellbeing. There are plenty of people within CUH who can help with this if you are not sure what to do. For example, if you’re aware you have a patient coming in with hearing loss, who isn’t a British Sign Language user and you’re not sure how to communicate with them, or a patient with sight loss or a patient with another sensory, cognitive, physical or communication impairment, you can contact the Accessibility team in the first instance and they will be able to help: cuh.accessibility@nhs.net.

The Trust receives many lovely comments from patients expressing their gratitude for ‘Jools, Nicky and the whole NF2 team’:

I just really need to give a shout out to Juliette in the Addenbrooke’s NF2 team. She sorts so many of my problems out almost instantly.

“She is very helpful when appointments need to be made around school stuff, is fab at timing with appointments, knowing we travel and happily coordinates everything. She always ensures she emails me after I speak to her and generally just takes the NF2 stress out of everything. Even when I ask her to rearrange things 3x is still happy on the case with everything.”

Worth her weight in gold.

Nerve Tumours UK is the national charity providing support to people with conditions that cause nerve tumours, such as NF1, NF2, and Schwannomatosis.

If you would like to find out more about NF2, please visit the Neurofibromatosis Type 2 NHS Website or CUH’s NF2 service page here.