A security officer who offered support to a family in the emergency department, and a senior pharmacy technician who worked to ensure that a patient could continue his treatment at home are the recipients of this month’s You Made a Difference award. 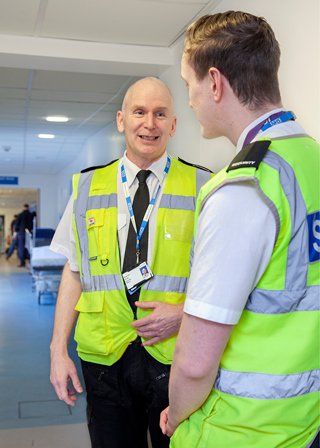 Malcolm Smith has worked for the Trust as a security officer since 2004. A respected and well-liked member of the team, Malcolm is described by his colleagues as reliable and always working to a very high standard. One colleague said, ‘Malcolm has seen a lot of faces come and go in his time here but he has always focused on making the hospital a safer place. If I could sum his up in three words it would be safe, kind, excellent.’

Malcolm’s winning nomination read, ‘We brought our son to A&E. He suffers from extreme anxiety and had been self-medicating with alcohol. While waiting to be seen he was begging for another drink. Malcolm stepped in. He sat and talked to him and kept him calm.

‘We were at our wits end having been trying to help our son day and night for five days. Malcolm kept us calm too. Another member of the team made us tea and brought us biscuits. Malcolm stayed with us until our son was admitted and even popped by the next day to see how he was getting on.

We will never forget what Malcolm did. He was there for us when we needed support. 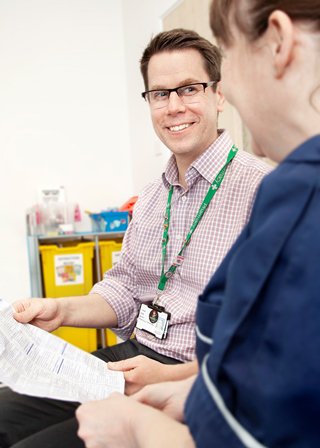 His role involves co-ordinating the chemotherapy for patients across the paediatric day unit and ward C2, including producing printed charts for patients in order to continue their treatment at home. James is heavily involved in the set-up of clinical trials and ensuring that they run smoothly across the oncology and clinical trials dispensaries. James also takes on some ward based duties and has an interesting taste in Christmas shirts, bringing a smile to both patients and staff.

James received two winning nominations, one of which read, ‘James went the extra mile to help a family who had difficulties reading and writing. In order for the patient to be discharged the family would be required to administer a complex medication regime, but they had difficulty understanding dosages. James went out of his way to create drug charts including taking photos of the drug/tablet boxes, as well as noting the times of day these needed to be taken.

‘Without James’ valued assistance, the likelihood is that the young man would have remained as an inpatient. James is always one of the most helpful colleagues, nothing is ever too much. He should be very proud of himself.’

James provided the family with a better understanding, enabling the patient to be discharged from hospital.