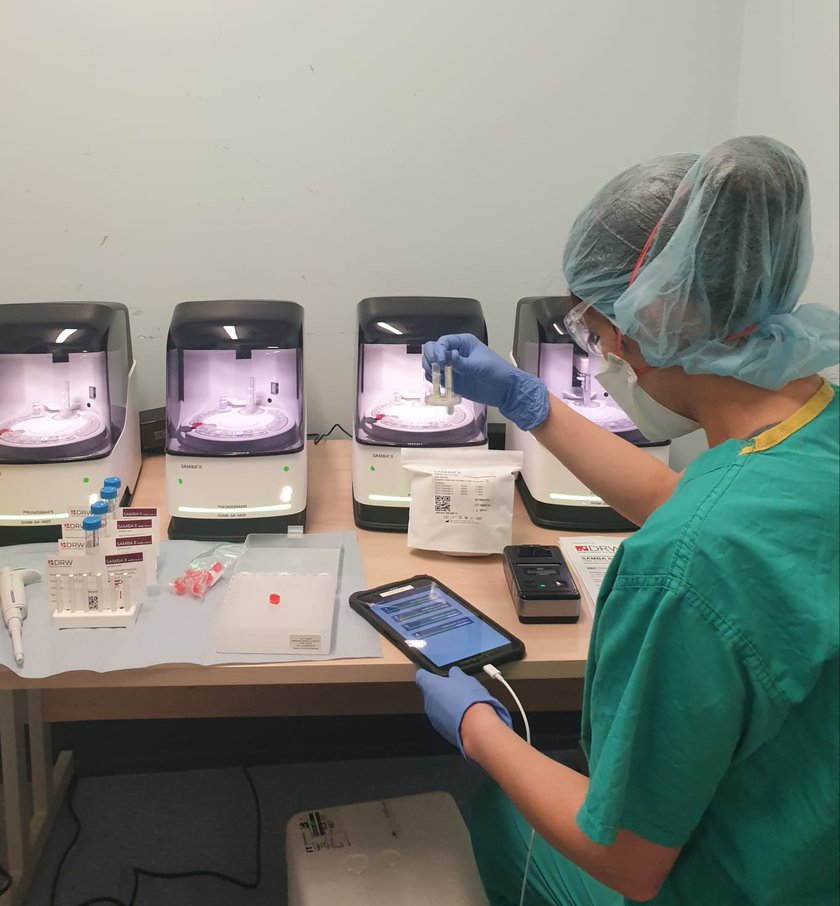 The first analysis of a new point-of-care “nucleic acid test” for SARS-CoV-2 in a UK hospital setting shows these machines dramatically reduce time spent on COVID-19 ‘holding’ wards – allowing patients to be treated or discharged far quicker than with current lab testing set-ups.

The rapid diagnostic capability of SAMBA II devices – an average of 2.6 hours compared with 26.4 hours for standard lab tests – led to an increased availability of ‘isolation rooms’ needed for infected patients, as well as fewer hospital bay closures.

University of Cambridge researchers behind the new study, currently a pre-print and awaiting peer-review, say that the time and hospital capacity spared by these devices will be “critical as we move towards autumn and winter”.

The SAMBA II machine was developed by a University spinout company, Diagnostics in the Real World, and deployed for trials in Addenbrooke’s Hospital, part of Cambridge University Hospitals NHS Foundation Trust (CUH).

The backlog of routine operations and screenings as a result of the pandemic is a huge issue, and must be resolved ahead of winter, when the NHS will face even more pressure from other infections like norovirus and influenza.

Rapidly testing admissions for SARS-CoV-2 at the point of care is essential for reducing COVID-19 transmission in hospitals, speeding up access to urgent care and allowing safe discharge to care homes. It could make all the difference in a few months’ time.

“Use of point-of-care testing would speed up the identification of patients for COVID-19 clinical trials, and receiving an experimental treatment a day earlier could make a clinical difference.”

“Hospitals across the UK, as well as care homes and prisons, could benefit from SAMBA II devices,” said Gupta, from the Cambridge Institute of Therapeutic Immunology & Infectious Diseases (CITIID). “Given the technological capital of the UK we should not be falling so short on rapid point-of-care testing.”

Standard tests are sent for analysis in central laboratories, where backlogs can see delays of two days or more. SAMBA machines can produce a diagnosis in as little as 90 minutes.

Dr Helen Lee, CEO of Diagnostics in the Real World, developed the SAMBA II technology while at Cambridge’s Department of Haematology. The chemistry behind the machines has been used for on-the-spot HIV diagnostics across Africa.

The devices search for tiny traces of virus genetic code, and are extremely sensitive in the detection of active infections. Once nose and throat swabs have been loaded into a SAMBA machine, the process is fully automated, making them easy to use.

The success of the COVIDx study saw the hospital switch nearly all of its SARS-CoV-2 testing from the standard lab ‘RT-PCR’ tests over to the use of SAMBA II during May: an opportunity for a “real-world” comparison and its effect on hospital functioning.

Gupta and colleagues compared data from the electronic patient records of all those who had in-hospital tests done in the ten days before and then after the switch to SAMBA devices at CUH.

The researchers found that the average length of time patients had to spend on a COVID019 ‘holding’ ward before they could be discharged or progress with treatment almost halved: dropping from 58.5 hours to just 30 hours.

They also saw a fall in use of the single-occupancy ‘isolation’ rooms in which COVID-19 patients are ideally treated – from 30.8% to 21.2% after SAMBA’s introduction, as patients with symptoms were shown to be COVID-19 negative.

The majority of those tested using SAMBA II during the first ten days of hospital-wide use were admissions to the Emergency Department (ED). The remainder included pre-op screenings (11%) and discharges to nursing homes (10%).

Some 96% of the SAMBA testing on pre-operative patients increased speed of “surgical intervention”, including kidney and liver transplants. The tests also allowed earlier discharge to nursing homes or into supported living in 79% of those cases, with the remainder delayed by “systematic issues” not tests themselves.

Dr Dami Collier, who coordinated and analysed COVIDx, said: “Our research demonstrates that point-of-care testing with SAMBA II machines is not only reliable, accurate and much faster, but that the diagnostic speed leads to significant real-world improvements for patient care and safety.”

CUH Medical Director, Dr Ashley Shaw, said: “Point of care testing has been hugely beneficial in enabling our clinical teams to make well-informed and timely decisions, keeping patients and staff as safe as possible throughout this difficult period.”

This work was supported by Wellcome, the Addenbrooke’s Charitable Trust, and the National Institute of Health Research (NIHR) Cambridge Biomedical Research Centre.