Derrick Ayebo’s recovery was “almost a miracle” according to his physiotherapist, Gianluca Saracino.

Father-of-three Derrick arrived at Addenbrooke’s hospital in November 2021 after treatment from a car accident abroad became infected. He had sepsis deep in his leg bone, his life was in danger, and leg amputation was being discussed. Derrick needed multiple operations on his leg, plus powerful antibiotics to treat the infection. 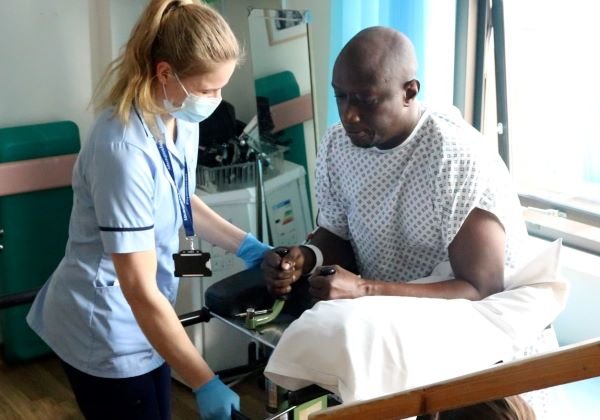 But earlier this week, after more than five months of treatment, 46-yr-old Derrick was discharged from hospital, able to walk with the help of a frame.

Gianluca, who began treating Derrick in April this year, said that he was in the top one percent of successful recoveries. He added:

I was amazed how much Derrick achieved - it was like a miracle. He said to us ‘please don’t give up on me’ and he had promised his son that he would play football with him again.

Learning to stand was extremely painful for Derrick, but he was determined to be able to feed himself, dress himself and regain his independence once again. 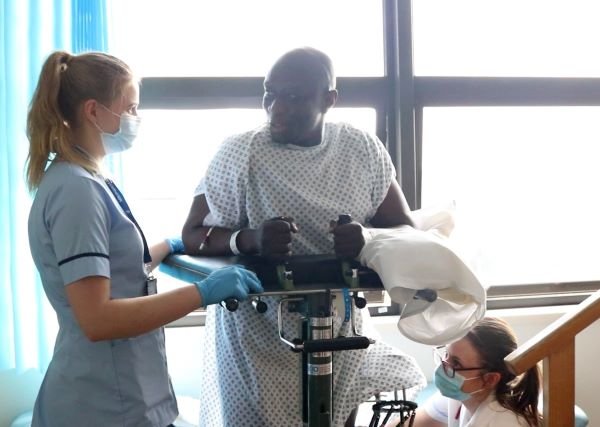 I promised my son that I would play football again with him. It is incredible what the wonderful people at Addenbrooke’s did for me – everyone, from the consultant, the secretaries, the nurses, the cleaners – everyone. I can’t thank them enough.

“As for the orthopaedic team – I can’t speak highly enough of them. Being here for so long, I have seen the magic that they do. In my five months I saw more than a hundred people come in, people who have had car accidents, or who have fallen off ladders at home, and I see how people are helped. They come in in trouble, and they go home happy.”

He added: “So many people have invested so much into my recovery. I am so grateful to them. I want to get stronger not only for me and my immediate family, but for the whole team here at Addenbrooke’s. They all really care, they really do.”