To celebrate international nurses' day we spoke to Jimmy, a clinical research nurse, and his journey from the Philippines to come and work at Addenbrooke's.

To read more stories from our nursing teams click here. 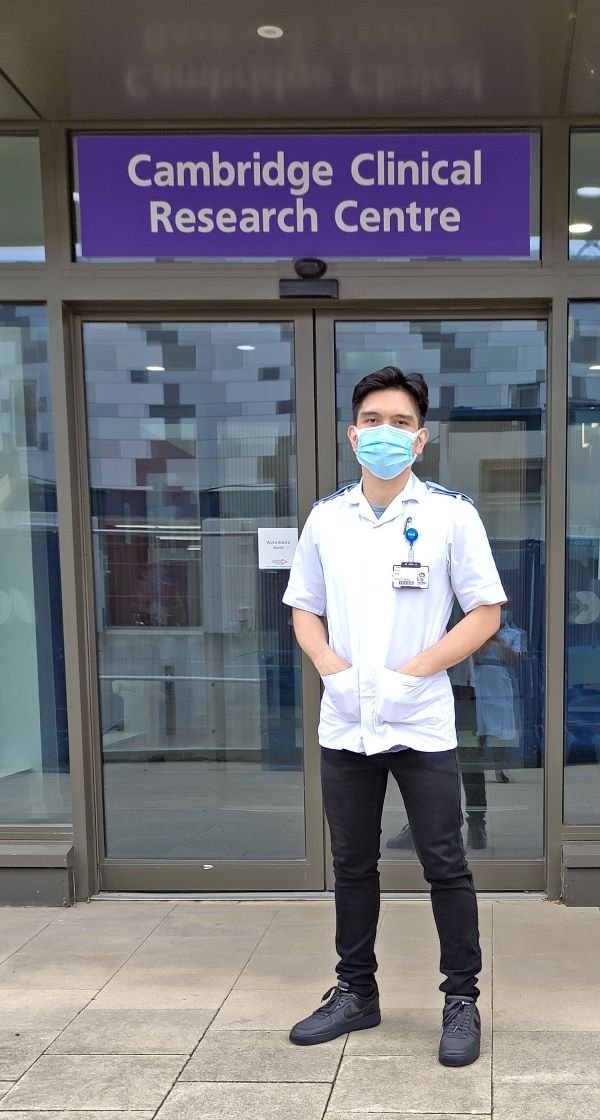 Tell us a bit about your CUH journey – your background, how and when did you join us?

Hi, my name’s Jimmy, but you can call me Jim, and I’m an international nurse from the Philippines.

I grew up in household of four brothers where I’m the eldest. My father was a general surgeon who loved the poor, and my mother was a hardworking housewife who had the best cooking in the world, which unfortunately have been affected by a debilitating disease termed as rheumatoid arthritis.

It was hard to think about it before I left them, but it’s for her own good as well that’s why I’m here.

I became a nurse because this is where the opportunities have brought me. I chose it mainly as a pre-med course, where I had a step-by-step plan with my dad on how to pursue the dream.

Unfortunately, life happened and my dad passed away 2009, when I was on my 2nd year of nursing. As the eldest, in part with my mum, I had to take the responsibility and be the breadwinner. After graduating and getting my license shortly after, I didn’t work as nurse right away. I started in a call center job, for five years.

At first I said I’d just do it for a year, that became two, that turned into three, and then five. At that point I didn’t like where I was headed, so I took the shot of getting back into nursing. I worked for two years in a government hospital, then started looking for more opportunities, and overseas was the goal.

Choosing the hospital for me was easy, I targeted Cambridge all because I have a bandmate that was here before me. Kind of a shallow reason but that’s what it was, and I also had enough of the sun so wherever it’s cold.

Realising though that this is a serious decision that would define my next years, I looked for other choices, where I ended up choosing CUH more. The history around the name, being the cycling capital, a safe place outside of London. Most of all, since I’m a part fish, there’s a swimming pool close by that had such a good photo it made me dream of swimming after a long day's work.

At first these seemed like simple reasons, but I got here and found out how great of a choice I did.

I won't believe I’m getting deployed until I see a plane ticket, heck until I get to fasten my seatbelt on my window seat.

After gathering the courage to live alone overseas, late 2018, I applied in a recruitment agency.

In a suit and tie, I passed the nerve-racking initial interview and got started with the requirements. First was the daunting IELTS, then the nursing based CBT that I needed to pass in the Philippines. The last time I was this serious on a review was almost a decade ago for my licensure examinations, on top of the pressure we also borrowed the money needed to pay for them.

Fortunately, I passed them both in one take, and I’ve never felt so lucky and blessed, I just thought, God’s just so good to me... At this point it’s just the papers remaining. Learning from the other recruit’s they said it’s just all smooth sailing by then, but lo and behold, Covid-19 broke out, and the deployment ban for nurses happens.

The waiting game started, so much time passed I managed to transfer jobs to another hospital. Then a home based gig, and an animal bite center job at the same time.

Rainy days come to an end though, and I get a deployment date of September 1st 2020. We were the first batch since the pandemic and I was so thrilled. All excited and the preparation done, here we go again, delays just won’t leave me and I was left behind because I was still waiting for my visa.

I got left behind, disappointed and just accepted the fact I won’t get deployed until next year. But surprise again to the family, I got my visa a few weeks after, and was given less than a week to prepare. From suspense to manic episodes, disappointment, excitement, with a touch of cold feet, all these and I’m not even in the UK yet.

All I can think of that time though was my mum whom I was taking care of.

Simple worries of who’s going to make her the warm bag in the morning when her knees just won't let her stand, who’s making her coffee with pandesal with a side of tablets, the weekly methotrexate injections because she can’t stand the tablet, we just got used to the routine.

My brothers though were all grown up then, all capable independent men, that I actually got more worried about my cats, whom have no clue what’s happened when they don’t see me anymore. All for the sake of a brighter future.

I arrived early morning where I thought there was air-condition in the parking lot because my hands just blushed the minute I stepped foot outside.

October 1st 2020, after getting my negative Covid test result the same day, there I was waiting on departure.

How can I forget a scenic sunset shining on my face, while I was waiting for the boarding call, to add it was my first time travelling abroad. Anticipating a total of 17 hours of international flight, on my own...what If I get lost? or overslept on my window seat. Hopefully no one put’s a bullet in my baggage and get detained. All the airport news going around. I just had to tell myself, “You’re a grown man now, man up, and this is where your English kicks in.”

The plane took off in the dark, touch down Qatar, took pictures in Doha, stretched, then a connecting flight to Heathrow. I arrived early morning where I thought there was air-condition in the parking lot because my hands just blushed the minute I stepped foot outside.

I got welcomed by the recruitment team who walked me to Grantchester house where we settled for 14 days to isolate. After a month of intensive training (and learning how to make a proper spaghetti) with the help of the Education team I passed OSCE and got my PIN in December 2020.

I started in the wards where I first joined the famous D8 - trauma and orthopaedics. I had a good team who worked with me step by step during the supernumerary phase.

For a few months I was a sponge. It’s hard at first of course, but being an international nurse I understood the moment I boarded that plane I have been up for this challenge. It’s kind of funny now thinking about the first months...waiting for the lift, hoping I’d be alone so I could look at my reflection and say the exact words “You can do it man, you are qualified, game face on and man the f up.”

Having a great manager helped a great deal. I never had a manager that would have a sit down and genuinely listen, I never had one that I can bother in the office to help with some IV’s because everyone was busy.

Overall, the group was all about teamwork. It never runs out of challenging moments with the sisters but I took at it as part of the learning process. I’m grateful my foundation in the NHS got established in D8.

Now at present, after a year, I needed to chase where my motivation is pointing me to, so, I started searching the job bank. I tried a couple of interviews, failed once, but got accepted to my first choice, research. The role just ticks the boxes for me.

Being in a university hospital it just bothers me not to take action. All this learning happening around me, I wanted to study again, I wanted to take part in cutting edge of science, I am such a dreamer.

The goal of research is to improve what is currently existing, to get the applied discipline of science moving forward. With my role now, in a way I get to contribute to that. The clinical trials, the current studies, and all the learning that’s ahead of me, and I get to make a living as a full-time staff of the hospital.

When I arrived here I was undecided, said ok I’ll stay for a year, or do my bond of 2 years. Now though where I’m at, I genuinely with conviction say that it’s a bright future ahead of me, no time limits, just looking forward for more opportunities in the future.

What’s the best thing about working at CUH?

What words of advice would you give to someone who is just starting their career at CUH?