Two new treatments which tackle novel aspects of Covid-19 infection are to be tested in an innovative trial which will respond quickly to results from small numbers of patients. 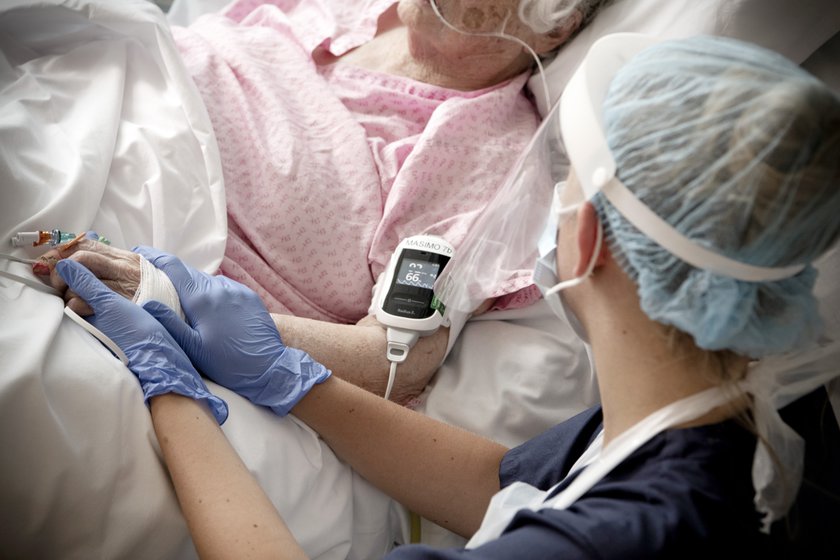 Nursing caring for a patient

The newly launched trial, known as TACTIC-E (the “E” stands for “experimental”), has been designed to test drugs that have been specifically developed to treat Covid-19 as well as investigating whether combinations of drugs that are already in use can be effective.

It will determine whether the major organ complications in severe Covid-19 can be reduced (or prevented) by targeting previously unexplored pathways – via the gut to reduce the inflammatory response, and via the inner lining of blood vessels to help increase the amount of oxygen available in the lungs.

One of the experimental drugs to be investigated is EDP1815, developed and manufactured by Evelo Biosciences. EDP1815 is taken orally, and acts on cells in the small intestine to control inflammation throughout the body. It does not remain in the gut for long and is not absorbed into the body. So it has the potential to reduce the body's exaggerated inflammatory response to Covid-19 and its dire consequences on the rest of the body, without being absorbed into the body.

The other trial arm is supported by Astrazeneca and aims to use two drugs used in combination: dapagliflozin and ambrisentan. They are licensed in the UK for use in diabetes and pulmonary arterial hypertension respectively. Doctors believe that by using them together, it could help combat the heart and lung problems often seen in patients with serious Covid-19.

Patients with Covid-19 who are admitted to Addenbrooke’s Hospital will be screened to see if either of the drug regimens would be suitable for them compared to standard of care. If so, they will be invited to take part in the trial. As always, only patients who give their consent will be admitted to the trial.

One feature that sets TACTIC-E apart from many other studies is the richness of the data that will be collected from each patient. Investigators will look at data in great detail after just ten patients have been dosed per arm, and then again after increasing numbers have been given the drug (30 and 100 per arm). This sort of frequent analysis of data is often done in early drug development - but in this case the drugs being used are either licensed or have few side effects; furthermore, supply and distribution of these drugs could be easily scaled up to reach patients who need them if the drugs are shown to be effective.

With cases of Covid-19 in the UK falling, investigators of TACTIC-E plan to extend the study to countries where the disease is now very common, so that any early indicators can be spotted, and benefits to patients realised as soon as possible.

As with similar trials, such as TACTIC-R and RECOVERY, potential new treatments can be added into the trial to be tested as they are identified.  Each of the treatments will target as yet unexplored aspects of Covid-19, offering the chance to quickly test new regimens as well as shedding new light on how SARS-CoV2 causes such severe disease and complications in some people.

He said: “Covid-19 is a complex disease that affects people in different ways across the world, and we are going to need a range of treatments in our armoury to be able to beat it. Each drug may bring a small but incremental benefit to patients, therefore it is likely that testing and progressing combinations of drugs which have a sound scientific and clinical outcome is likely to have a larger impact than conducting single arm trials in large numbers of people before effects are seen.

“On the Cambridge Biomedical Campus we are uniquely placed to work in the NHS alongside academia and industry to bring early phase drugs into circulation, potentially making a massive difference to the lives of many, many people.

We have brought all this experience to bear with TACTIC-E. We will be trialling treatments that we consider likely to work, which are either already licensed, or we know to have minimal side effects, and observe them very closely to see what happens in order to pick the winning drugs early on.

Professor Ian Wilkinson, Director of the Cambridge Clinical Trials Unit, and Professor of Therapeutics at the University of Cambridge, said: "This is a time of huge national effort in the fight against Covid-19 and I am delighted that Cambridge is playing a key role in this.

TACTIC-E will test the effectiveness of a number of new drugs in patients admitted to hospital, in a similar way to the RECOVERY trial, but with a strong focus on identifying novel and clinically useful drugs early on as well as collecting high quality data that can be used by our partner pharmaceutical companies to seek the necessary approvals for widespread international use.

The trial is led by the Cambridge University Hospitals NHS Trust and is supported by the NIHR Cambridge Biomedical Research Centre. Funding and drug supply for the trial has been provided by Astrazeneca and Evelo Biosciences.

Based on data from two clinical trials, EDP1815 has the potential to modulate multiple immune pathways associated with the cytokine storm observed in patients hospitalised with COVID-19, resolving excess inflammation without the risks related to the complete suppression of the immune system.

EDP1815 is an oral biologic that acts on cells in the lining of the small intestine without being absorbed by other parts of the body. EDP1815’s unique mechanism of action uses naturally occurring links between immune cells in the small intestine with the body’s immune system to control inflammation throughout the body. As a result, it is believed EDP1815 may be well tolerated when used in combination with other drugs that may be needed to treat patients with Covid-19. In clinical studies to-date, EDP1815 has been well tolerated with no overall difference from placebo. The anti-inflammatory activity seen in these earlier clinical studies suggests EDP1815 could offer clinical benefit to patients with immune system overactivation.

The dapagliflozin and ambrisentan arm is designed to combat two common problems seen in patients with COVID-19. Dapagliflozin has been proven in a number of large studies in patients with and without diabetes to protect against damage to the heart, which is a major problem in patients with COVID-19. In COVID-19 there is also a problem with oxygenation of the lungs, where blood is shunted to areas of the lung where exchange of oxygen is inefficient. This causes a lack of oxygen in the blood stream, called hypoxia. It’s thought that ambrisentan could treat this by blocking the action of a hormone in the lung. Whilst ambrisentan can cause accumulation of fluid, it’s thought that the combination with dapagliflozin will prevent this happening. In April 2020, AstraZeneca and Saint Luke’s Mid America Heart Institute initiated a global trial to assess the potential of dapagliflozin as a monotherapy in patients hospitalised with COVID-19 who are at risk of developing serious complications, such as organ failure.